And sunglasses too – at night. A bit weird…

What’s he saying? He talks like an old-time radio presenter, but the words are blurred. His lips are right on the mic. Uh oh. He’s taking a request from a distant relative. Is that? Yep – he’s playing Y.M.C.A. again. 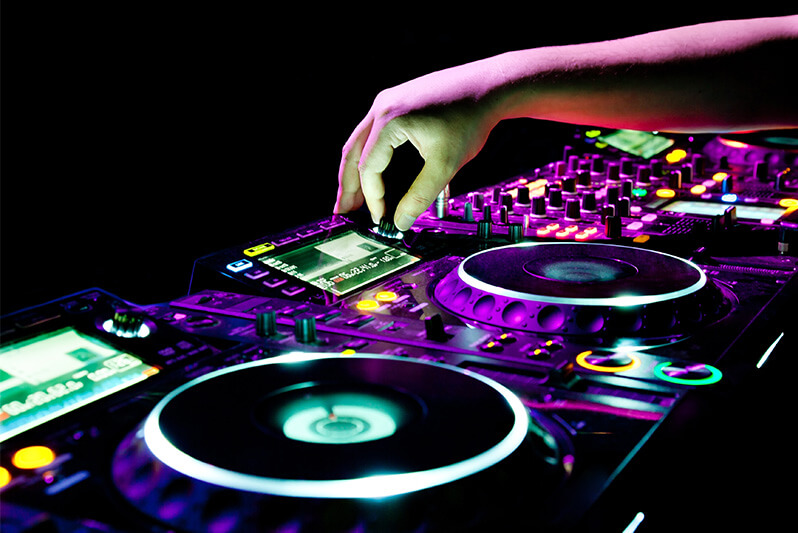 We’ve all been at someone else’s wedding and felt the school disco vibes. Not good.

This isn’t supposed to knock wedding DJs, there are some superb ones. The point is that people (generally) hire a DJ, not a disco sound system. They want variation, and some modern tunes! Not just 70s “floor fillers” – if any.

Pseudo-DJs are still lurking about in villages and towns around the UK, but with the rise of digital media, it’s tough for them to hide. Or they’ve had to drag themselves from a time warp.

Anyway, these days the choice of music for your wedding is enormous. Hiring a DJ is one option, live music is another – any type imaginable.

Suffice to say, the days of cliché, cheese ball wedding music are dead.

So, wedding music, what do you like? Perhaps you’re not sure – in which case, perhaps these ideas will help.

A few years ago, out of nowhere, folk music exploded back into the mainstream – with Marcus Mumford and his band at the forefront.

With so much overproduced, synthetic sounding music in the charts it was refreshing to hear something honest and stripped down. The folk hype is dying down, and Mumford & Sons have started releasing strange experimental stuff. But, their banjo fuelled legacy remains in the wedding scene.

Acoustic folk bands, with their driving rhythms and heartfelt songs won’t fail to get people dancing at your wedding. Plus, the acoustic sound isn’t seasonal. You’ll find hearing a folk song is equally as atmospheric in the golden light of a summer’s evening as it is on a crisp winter’s day.

It’s also great to hear folky versions of your favourite pop songs – it gives them a new lease of life.

There’s nothing quite like that euphoric, “days of our lives” feeling you get at a festival. The sun’s touching the horizon and the sky is on fire; your favourite band is playing the first notes of your favourite song. 1000s of voices unite. chills.

Festival style bands help bring the above feeling to your wedding. They’ll start off acoustic, to get the toes tapping – perhaps playing a bit of George Ezra, The Lumineers and other festival favourites. Then, after having warmed up for themselves they’ll play an electric gig – like a mainstage headliner.

This is brilliant way of getting more for your money – a two acts in one deal. The variation might appeal to more of your guests too.

Fancy being transported back to the days of the speakeasy, bobbed hair and cloche hats? Vintage American swing inspired music is becoming increasingly popular at weddings.

Internet sensations Postmodern Jukebox showed the world just how cool it sounds when you jazzify contemporary hits. Especially ones that are completely different, like hip hop.

It’s musical creativity like this that ears were made for. Not only will it have you and your guests laughing, but it adds a decadence to your wedding without making it stuffy.

You may not be a traditionalist, but to appreciate modern classical music you don’t have to be. Because, it can be exciting and a world away from the formality of the past.

Being a classical musician is the modern era doesn’t mean you ignore popular culture and have no clue – unless it’s a Beethoven symphony. Many love creating classical twists on well-known radio hits and all manner of different genres (think as diverse as AC/DC) as well as traditional wedding compositions.

You’ll find there’s not much that doesn’t sound amazing when tackled by a professional string quartet.

Unsurprisingly after the recent royal knot tying, solo cellists have also seen a huge increase in demand. Did you see Sheku Kanneh-Mason’s awe-inspiring performance at Harry and Meghan’s wedding? Wow. To say the least.

Whatever your thoughts on classical music, know that if you pick the right musicians you’ll not be taking the boring route.

The true troubadours of music – taking inspiration from the train hopping folk heroines and heroes of days gone by. Moving from place to place with just their instruments and voices.

This is the way folk music, and acoustic was meant to be – it’s as raw, real and relaxed as it gets. Guests will love being on the level and chatting with musicians as they wander around your wedding. It’s like that moment someone brings out a guitar at a party (and is good!), only on a bigger scale. It’s spontaneous and natural.

You know, it’s not just DJs that can mix. Old fashioned, static wedding setlists have been abandoned by some bands – in favour of mash ups. Using exceptional musicianship, these bands create seamless mixes with everyone’s favourite songs – that build a riot on the dancefloor.

This innovative way of playing has an infectious energy, with the builds and drops usually associated with clubs and dance music.

The primal beat of a dance anthem mixed with the sincerity of a live vocalist or percussionist is a proven way to fire up your wedding party. Or any party.

Trends aside, it’s your wedding – and you can have any music you like. It can be fun scouring the internet for bands, or DJs – but it can also be tough deciding who to book. 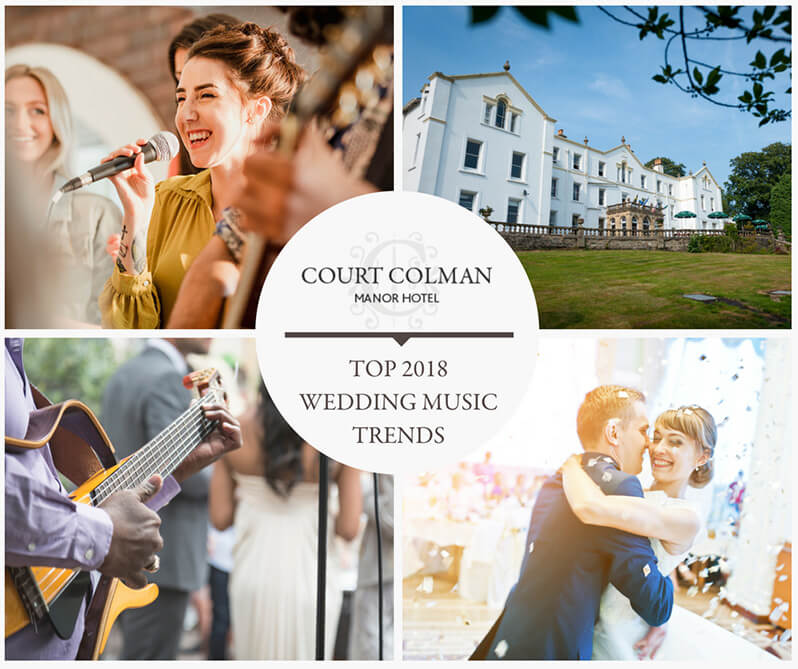 At Court Colman Manor in South Wales, we can help you plan your wedding from A to Z and put you in touch with some outstanding musicians.

Here’s a few options, why not have a listen –

Our Next Wedding Showcase

Come and join us for our next wedding showcase on Sunday 10th July 2022. Your chance to see the Manor set up as it would be on your special day, and also a chance to view our fabulous bedrooms.